What About Chess Engines? Part 1

Is one computer engine better than another? Should I let it "think" for a longer time? What about cloud computer engines? I decided to run some tests. First I setup SCID vs PC with a position I've been trying to figure out. It's a middle game with a lot going on. Not easy to say what is best. Below is the FEN (Forsyth-Edwards Notation) of the position. In case you want to do some tests yourself. 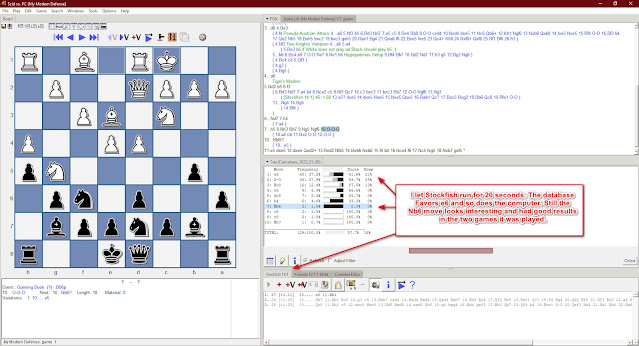 I thought Nb6 was interesting. It had only been played twice in my database of over 5 million games. Black appeared to be the winner of both games by the graph. I ran Stockfish for 20 seconds. Stockfish liked the number one entry from the database e6. With Nh7 as it's second choice which comes in at number 10 on the database list.

So I let the engine run while I did some errands. When I came back Stockfish had looked 36 moves ahead. Still e6 was it's favorite.

Well what would Komodo think? With only 20 seconds to "think" Komodo liked O-O with e6 coming in second. Note Komodo 12 only looked 18 moves ahead in 20 seconds compared to Stockfish's 27 moves.

Next I loaded the position into the Fritz 16 GUI. Again I let Fritz 16 analyze for 20 seconds. It looked 27 moves deep and liked the castle move O-O. While I was setting up the cloud engines were researching the position. Over 20 seconds but less than a minute I think. This time Stockfish looked 42 moves deep and again liked e6.

So I stepped through the database and decided e6 really is the best continuation. So back to the questions.

Is one computer engine better than another? Yes Stockfish is King, but it never hurts to research with other engines. Should I let it "think" for a longer time? Yes if the position is complex enough that the engines don't all agree. What about cloud computer engines? They are more powerful. It may not always matter but it's worth consulting them.

If you liked this article please let me know below. Have thoughts on this subject you care to share?

Here are the analysis boards from Lichess and Chess.com. Click Here for Part 2. 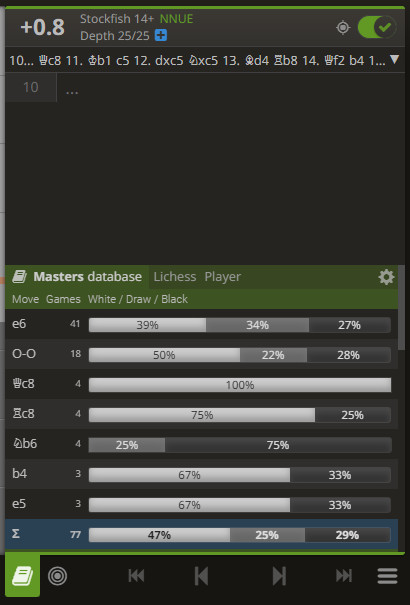